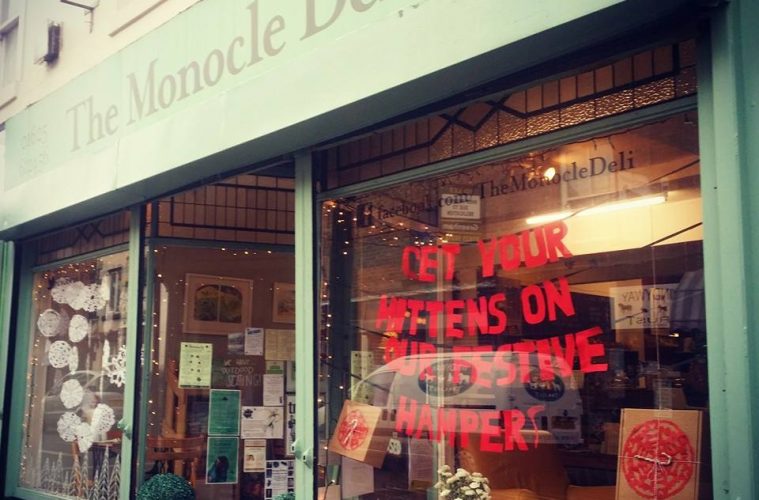 Tuna, cucumber and a little bit of art

Macclesfield’s Monacle Deli has been taken over by new owners, and they have big plans to join the artistic transformation currently transforming the town.

Friends, Chris Kennerley and Melanie Alexandrou, took over The Monacle Deli on Chestergate in March after working there for a year, and 18 months respectively. The previous owner Annie Edwards decided to sell the business to become a full-time mother of two and offered it to them.

Kennerley said, “While this was totally unexpected and a little daunting to start with we both quickly realised it was a chance to create the kind of space we think the town needs.”

Which is a space that is not just simply about sandwiches.

The venue will run monthly art exhibitions by local artists as well as hosting live music evenings and workshops. There were already exhibitions being held at the deli on a fairly regular basis, but the pair felt they should become more prominent.

“We want to provide local artists with the opportunity to show their work to the public in a less formal setting, outside of a more traditional gallery space. We aim to become known as a more multi-purpose venue; cafe, gallery, shop and event space,” said Kennerley.

In April they held an exhibition of paintings on canvas by Mars Black, which was a great success with the artist selling all but a few of the 35-odd paintings he exhibited.

This month they will be showing an exhibition by Marc Jackson, who has his regular comic strip in Macclesfield Today, and has recently been commissioned to provide a comic strip for the Beano. He will have a selection of his comic art, t-shirts and large-scale prints of his comic book pages on show. He also ran a comic workshop for children.

As we went to print Jacksons brilliant drawings could been seen all over the deli’s windows.

In the coming months they have Richard Alderson and Bethany Gray, and are planning a mini Open Exhibition later in the year. Some of these exhibitions will have preview evenings, and possibly meet-the-artist sessions.

“We are also in the process of organising a French Conversation Class. We are open to similar clubs, classes, groups and workshops taking place at The Monocle if any interested parties would like to get in touch. Live music is tbc, but would be small-scale acoustic groups,” he says.

When you look at their backgrounds, it’s easy to see why they have decided to make The Monacle that little bit different to other delis.

Alexandrou is an artist who has exhibited in Macclesfield and further afield. Her art encompasses a wide range of mediums, including painting, printmaking, bookmaking, postal art, textiles and zine making, with a focus on fauna and foliage, while Kennerly is a member of Sunderland Street Skiffle Group, where the members play various instruments; guitar, harmonica, banjo, snare drum etc. They rehearse at a space on Sunderland Street, hence the name.

Although the two, who both hail from Macclesfield, have never owned a business before, Alexandrou organised a pop-up art space/shop at Barnaby Festival last year.

She says: “The pop-up brought a lot of artists together and gave them a place to show their work and engage with the public, hold workshops and play music. Being able to incorporate this into the already well-established café element of The Monocle made perfect sense.”

At the moment they do not charge the artists commission, as Chris explains, “We want any money made from the sale of their work to go directly to the artist. We in turn ask that artists take responsibility for hanging and taking down their work, and any further promotion other than what we post on our website and Facebook/Twitter etc.”

Melanie herself will be exhibiting some of her work at The Monocle in December, while Chris is set to play on the acoustic stage at the Dead Good Day Out on Bank Holiday Monday 26 May.

However don’t fear if art isn’t your thing, the deli will still provide fresh ground coffee, homemade cakes, platters and sandwiches to eat in or takeaway. There is also a business lunch service, and whole cakes and seasonal gift hampers are available to order.