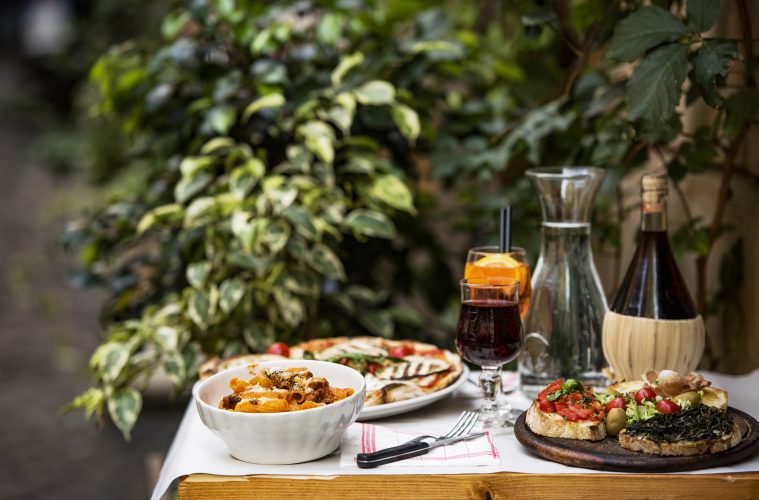 It most be difficult running any kind of restaurant in Bollington, not least because it is such a crowded and competitive market. Only Manchester’s Curry Mile would appear to have more eateries per square mile and that is in a densely populated area.

It could be that the residents of Bollington have forgotten how to cook, and restaurants have become as vital to the modern Bollington lifestyle as supermarkets, more likely it is down to the twin facts that the town is fairly affluent and retail rents are reasonable, compared to nearby town centres.

Nevertheless, it would be a brave man who would open a restaurant in the town today. When a town of such modest size has two highly regarded flagship restaurants, the Lime Tree and Oliver, the would-be restauranteur would look elsewhere. And has for those already in the town why bother?

But bother they must and the results make the town a pleasure for the casual diner.

Briscola has certainly carved out its own niche in this crowded market; a restaurant-cum-pizza parlour – come grill it attracts loyality from its customers many , from my own observation, who are regulars. Then there is its social media activity. With well over 1,000 Facebook followers it could lay claim to being the most digital savvy restaurant in the area.

But restaurants do not become good because they have more followers than any other, nor do they become bad because some egotist on Trip Advisor has had a bad day. No it is food and service that defines a restaurant’s success or otherwise, and in such a packed market, exceptional needs to become the norm.

One would not describe the restaurant as high-end it is much more informal than that – you’d feel very out of place in a dinner suit – it does, however, have high standards. Service throughout was prompt, attentive yet friendly, with none of that sense that the waiters are watching your every move. It was, again, informal, but without ever descending into casual .

Prices were on the toppy side – with starters around £6 and mains around £15 – but this is something seen throughout east Cheshire, where restaurant owners never seem to understand why their special deals prove popular.

To be fair, the restaurant does offer a Winterfest menu which gives two courses and a glass of wine for £12.95. Pretty good value anywhere, but exceptional in east Cheshire.

We stuck to the main menu. I ordered Fritto Misto, a fried calamari and whitebait in garlic mayonnaise, my partner fresh mussels in a tomato sauce. Both dishes were well presented, and whereas I felt the misto was a little over-elaborate and confusing tastewise, the mussels – a simple dish easy to mess up – were prepared to perfection. My partner even wanted me to find out the recipe, ie the exact recipe; from minutes in the pan to the ingredients of the sauce. Life’s too short.

For mains we shared the Risotto Di Estate –a risotto in tomato sauce (there is a pattern building here) and a chicken breast in cream sauce. I ordered the chicken which my partner thought was a little overcooked. I thought it was better than good, which just shows how subjective any review can be. The risotto was excellent (we both agreed) A simple well-cooked, well prepared dish. Italan home-style cooking at its best.

The portions were more than generous, so much so that – well-fed – neither of us could face the desert. A dereliction of duty on the part of the food critic, some readers might believe. They’d be right.

At the start of the review I wrote about the sheer weight of competition in the Bollington market. Briscola has as taken the wisest course in order to prosper. It is not taking on Oliver or the Lime Tree in culinary inventiveness, it is not seeking to be a high-end restaurant. It is a mid-range restaurant aiming to serve better than decent food. It succeeds. And is well worth a visit.