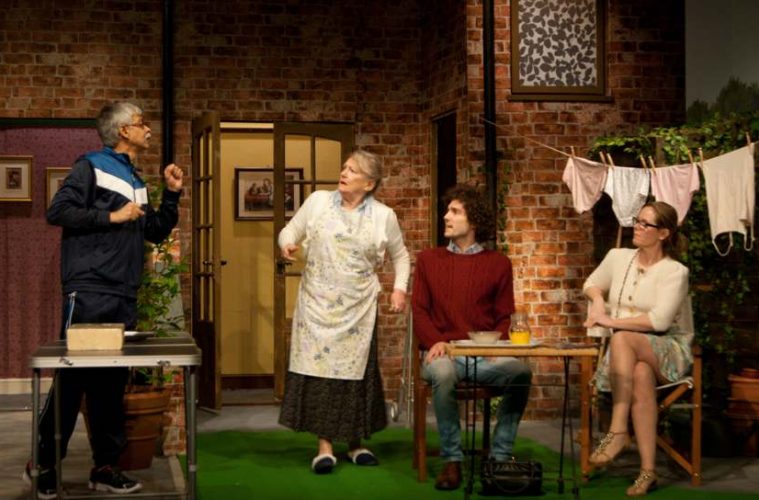 Alan Ayckbourn’s comedy “It Could be Any of Us” is always a challenge, the Poynton Players are the latest to take it on and Chris Kirwan went along to see how they did.

In an isolated country house, the Chalke family find themselves under suspicion of murder by an inept detective as he tries to uncover who killed the head of the family, Mortimer. In most whodunits, this would be a difficult task in itself but in this play, as Ayckbourn wrote it, the guilty party can be a different person each night.

The Poynton Players’ production of Alan Ayckbourn’s comedy thriller, “It Could be Any One of Us,” was a surprisingly dynamic interpretation with strong characterization of the ill-assorted group of artistic failures and misfits who include: Amy, a dysfunctional teenager; Norris, the detective who has never solved a case; Pat, an unpublished writer; Brinton, a lovelorn artist and simpleton and last but not least, Mortimer, an undiscovered composer and owner of the family seat.

The plot develops around elder brother Mortimer’s decision to bequeath the home to an ex piano student of his, Wendy Windwood. When the lucky lady turns up and announces to the rest of the family her intention to turn the estate into a dog-breeding centre, relationships take a turn for the worst and murder is on the cards.

Add a remote, windswept country house (the stage set brilliantly designed and executed in this instance), a disputed will and stir in some of Ayckbourn’s acerbic wit and you should have the makings of a good play. I say should, because the play, not the excellent performance, has itself some weaknesses, mainly because of the need to build-in the option to switch scripts to accommodate a different murderer. Perhaps the three separate outcomes are too clever and that in seeking to spoof the genre, it leads to some unnecessary confusion, weakening of script and some loss of dramatic irony. The director, Steve Heritage (wisely in my view) committed to the one version, allowing his highly competent group of actors to focus clearly on making the parody work.

All the murder-thriller clichés were on show on the night; thunder and lightning, blood curdling screams, unexplained noises and even a doll’s head rolled across the stage. But for all these tricks, it was the strength of the performances which made up for the shortcomings inherent in the plot.

In Mortimer Chalke, played with conviction by Peter Lancaster with overtones of Basil Fawlty, we had a character with great comic potential but as an out-and-out villain the character remained almost too dark, too heavy. The actor certainly succeeded in frightening half the audience to death throughout the first half but I would have liked to have seen more exploitation of the sardonic potential of the role which showed through in glimpses.

Norris Honywell, the amateur sleuth, was played sympathetically by Keith Wright who fully connected with the audience. His light touch and warmth soon won over the confidence of everyone in the auditorium, even if the rest regarded him as a meddlesome failure.

Jocelyn Polegate, played by Pat Short, appeared to be the voice of reason. The actress showed fine stage presence in carrying the burden of exposition. Her poise and deftly understated performance put me in mind of a young Judy Dench.

Brinton Chalke, played by Ron Cordon, was a welcome addition every time he took to the stage. He couldn’t fail to miss with his idiosyncratic and skilful characterization while Heather Handford, as Amy Polegate, the difficult teenager, brought realism to her role with uncanny accuracy and annoying precision, as many parents with children of a similar age might testify.

It would be invidious to pick out any single performance in such a strong cast but possibly the outstanding performance on the night was Denise Wright as heir apparent, Wendy Windwood. Her naturalistic performance showed real charm and a natural flair for comedy and left me wanting more.

I had to remind myself that this was an amateur production such was the quality of the acting and overall production standards. Well done to the producer/director and all the unseen technical staff. The Poynton Players is a modest, hidden gem of a theatre but there was nothing amateurish or back-street about it on any level. If you get the chance catch one of their productions see if you are as pleasantly surprised and impressed as I was at the authentic theatre experience waiting for you just around the corner.