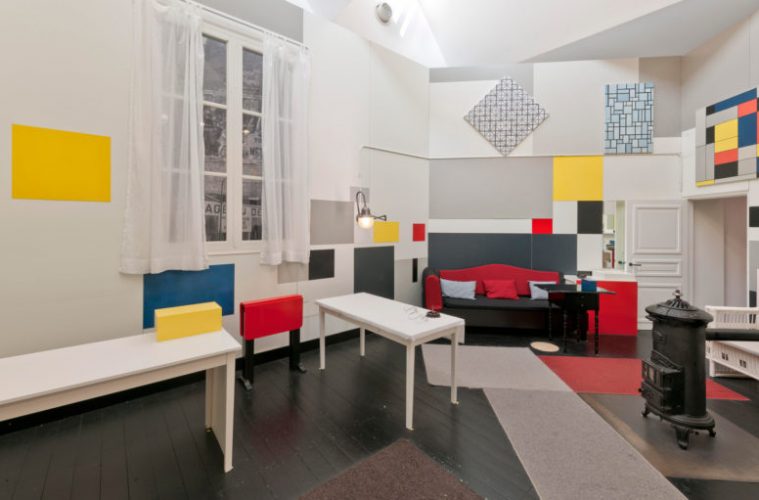 In Britain we don’t really “get” Piet Mondrian, but a new exhibition at Tate Liverpool goes someway to addressing this.

The Tate, it has to be said, is on something of a roll. After a barren few years when every exhibition seemed to be designed to show the cleverness of the curator rather than the work of the artist, it has bounced back impressively.

Earlier this year came the Matisse cut out show at the Tate Modern, a show of brilliance, and now at Tate Liverpool Mondrian and His Studios.

This is a quite exceptional exhibition which delivers exactly what its title states. For the centerpiece of the exhibition and its focal point is a recreation of his Paris studio. Impressive as this is, it is the works undertaken in the studio that are the point of the show.

The format comes close to gimmick but seeing where the artist painted and the pictures he produced somehow adds to the viewers understanding, in a way I should not have though possible.

The exhibition also goes someway to re-examining the artist from a British perspective. Mondrian (1872–1944) is undoubtedly a European painter of the first rank, and is regarded as such in Europe. In Britain, however, he most often regarded through a prism of the work of other artists notably Ben Nicholson and others in the St Ives set.

The most significant Mondrian exhibition on these shores in the past decade was in 2012 at the Courtauld, but again the exhibition simply explored the relationship between the artist and Ben Nicholson during the 1930s. At this time the two artists were leading forces of abstract art in Europe.

Their friendship culminated with Mondrian moving to London in 1938, at Nicholson’s invitation, where the two worked in neighbouring Hampstead studios at the centre of an international community of avant-garde artists.

Mondrian, seen as a bit of an oddity in his time,is now secure in his reputation as one of the most important contributors to the development of abstraction at the beginning of the 20th century, and his stunning and influential works are recognised by everyone from art lovers to students of architecture and graphic design.

Indeed, there is probably not a graphic design student alive who has not, consciously or unconsciously, been influenced by the Dutchman. Yves Saint Laurent essentially made a living from the recasting of the artist’s patterns on dresses.

The paintings hanging in the Tate may initially seem to be a series of squares, or rather rectangles, interlocked together in seemingly random ways, but the more one looks the more harmony can be seen, both in the balance of shapes and in the palette. Nicholson himself eventually graduated into producing a series of white reliefs, but Mondrian is committed to colour: eyesearingly bright. It is impressive.

On the very first wall the visitor is hit by an explosion of oranges and limes, wonderfully soothing but then strangely absent from the bulk of his output which is dominated by primary colours.

However the exhibition seeks to do more than simply repeat the artistic triumphs. It is not a retrospective more an examination of the factors that led him to develop his style – hence the recreated studio.

Mondrian and his Studios marks the 70th anniversary of the artist’s death and considers not only Mondrian’s significance, but also the circumstances (in both life and painting) that led him to make the switch from successful figurative artist in his homeland to international radical innovator.

Taking visitors through Paris, London and eventually New York, the exhibition tracks Mondrian’s personal and aesthetic journey, and finds threads between the two.

His first move – motivated by the pursuit of more fertile creative ground – saw him leave Holland for Paris in 1911 and brought about considerable change. Mondrian dropped the second ‘a’ from the Dutch spelling of his name (Mondriaan) as a signal of intent and immersed himself in the Parisian avant-garde community, but encountering Picasso’s experiments with cubism would prove the defining influence.

Highlighting the transformational impact of Picasso on Mondrian and his work, the exhibition includes pieces such as The Tree A 1913 which demonstrates the first bold shift away from the figurative towards abstraction.

A particularly enjoyable part of the exhibition is where it examines his interest in nature and urban buildings – in many senses his abstraction is an attempt to marry the best design elements of each.

Interestingly, in his native Holland it is the early attempts, more figurative than abstract, that draw the crowds. He was a very good figurative painter.

Leaving Paris and the studio, Mondrian then moved to London, where according to the sculptor Barbara Hepworth: his “Wonderful squares of primary colours climbed up the walls” – it is a perceptive comment that could only really be made by an artist.

His stay in London, meaningless in terms of his overall output, is nonetheless, the focal point of the British view of him. His move to New York was also fairly irrelevant artistically has the best work had already been done in the strangely neat and tidy and even fussy studio in Paris.

Many of the artist’s most famous works are in the exhibition including No. VI / Composition No.II 1920 which can be also be seen hanging on the wall above a doorway in a photograph taken of his Paris studio in the mid-1920s.

The exhibition reveals nothing new about this modern master, but it does present some of his best work in an enjoyable and innovative manner.