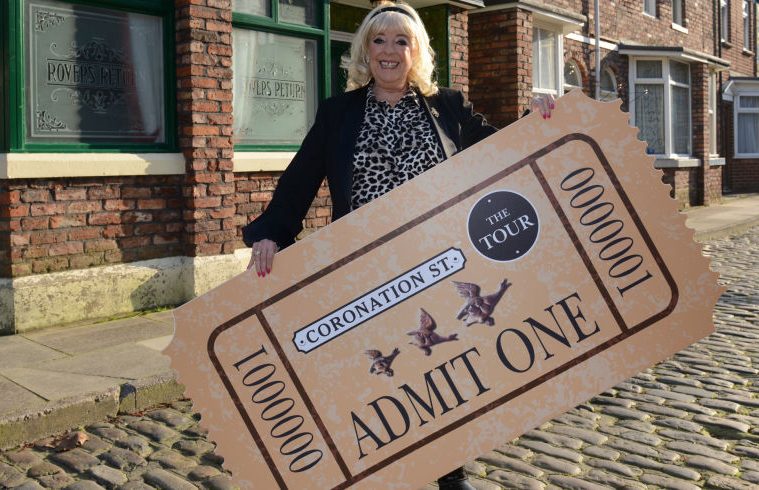 The tour of the Quay Street studios has proved popular, attracting visitors from around the world.

Debbie Lee from Derby, who was accompanied by her daughter Danielle Payne, became the 100,000th visitor on the tour.

As Debbie and daughter Danielle Payne stepped into Nick’s Bistro and opened the double doors to be led onto the street, they were welcomed by the cheers of the Coronation Street Tour team who brandished a large congratulatory banner saying “Congratulations! 100,000th Visitor.”

General manager, Andy Begg, presented the pair with a bottle of bubbly and goody bags filled with souvenirs, including a photo of her pulling a pint behind the bar of the Rovers Return as a reminder of the experience.

Andy Begg said: “What an amazing couple of months we have had since we opened to the public in April. We have welcomed an incredible 100,000 visitors to the tour and people have travelled from as far as Canada and New Zealand, which goes to show what a strong following Corrie has with the public.”

For a limited time only Coronation Street The Tour offers visitors the opportunity to go behind the scenes of the soap seeing dressing rooms, selected interior sets and even stopping for a photo in the Rovers Return. Upon stepping out onto the hallowed cobbles, guests can spend as long as they would like exploring the street, gardens and even the ginnel.

The tour will be open until 4 October and tickets can be booked online at www.ticketmaster.co.uk/coronationstreet.