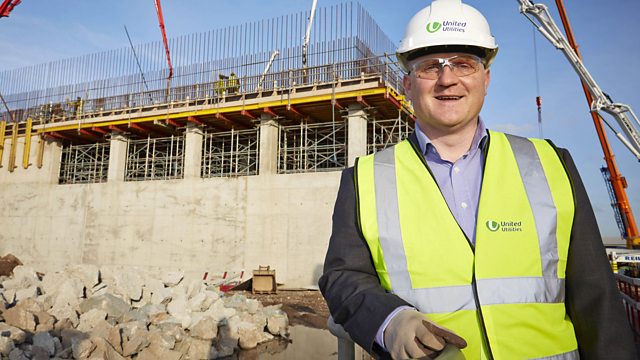 The ups and downs of life working for the North West’s water company United Utilities is the subject of a six-part TV documentary starting next week on BBC Two.

And one of stars of the show is John Butcher, the company’s regional aqueducts manager and self-confessed pipeline anorak.

The first episode of Watermen: A Dirty Business will broadcast at 9pm onTuesday, 15th April on BBC Two, with the rest of the series continuing on Tuesdays at 9pm.

The prime time observational documentary series is made by Mentorn Media, the production company behind BBC Three’s Hotel of Mum and Dad; Sky’s Greggs: More than Meats the Pie and the Channel 4 series The Fried Chicken Shop.

John’s job is to care for United Utilities’ 1,000km of large diameter trunk mains including the enormous Haweswater Aqueduct, and, although he doesn’t appear in the very first episode, he is looking forward to seeing the series.

“When I saw myself on screen the first thing I thought was that I need to lose about three stone! It makes you reflect on the job that we do when you see it through someone else’s eyes. It is really interesting. I am looking forward to seeing what people think. I knew I’d hit the big time when my photo made page 16 of TV and Satellite Weekly,” he said.

“I think they shot more than 750 hours of footage for the six episodes and at times it felt like we saw more of the film crew than our own families. They became friends,” he said.

To make the programme Mentorn cameras got unique access to United Utilities’ 5,000 employees and hundreds more partner staff and customers across the North West from Carlisle to Crewe.