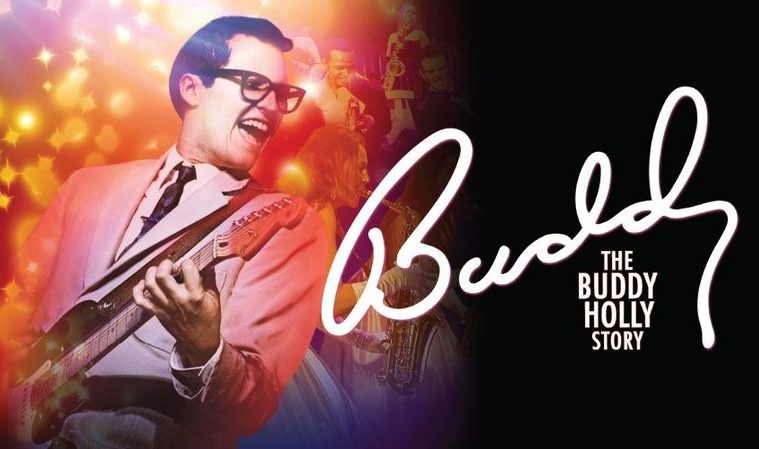 It was the mid 1950s recreated on stage and Buddy Holly and the Crickets’ stubbornness to toe-the-line and play country and western music was putting their burgeoning recording contract in jeopardy; a storm in a teacup maybe but the outcome would re-shape the history of popular music. Buddy stuck to his guns and insisted on playing this new music and the rest is history.

‘It’s So Easy to Fall in Love’ rang out and it certainly was easy to fall in love all over again with the tuneful melodies, jangly guitars and the upbeat lyrics penned by the talented and pioneering young man from Lubbock, Texas.

Buddy Holly’s life was tragically cut short in Iowa, February 3rd 1959 when along with Ritchie Valens and the Big Bopper, he died in a plane crash at the tender age of twenty two but his legacy lives on and is celebrated brilliantly in this musical.

In the all too few years he was recording, he re-wrote the face of popular music and almost single-handedly, laid down the blueprint for future generations of rock ‘n’ rollers such as the Beatles and the Rolling Stones. The floodgates were truly opened.

‘The Buddy Holly Story’ is much more than a trip down memory lane for ageing rockers. It is a very human story about how an ordinary kid overcame challenges at many levels and went on to see his dream come true. It is a warm, very human story wrapped up in some great numbers which have withstood the test of time and have now reached iconic status in the music business and in the hearts of his faithful fans.

On stage, the authentic-sounding numbers kept on coming. ‘Heartbeat’, ‘Truelove Ways’, ‘Listen to Me’, ‘It’s Raining in my Heart’, ‘Peggy Sue’, ‘Maybe Baby’ and many more; all done justice to by the superb Glenn Joseph (Buddy Holly) and his energetic and supportive Crickets (Adam Flynn/Scott Haining)

The characterization and sharp dialogue, so full of humour and warmth, kept the narrative drive at the forefront and never once did this musical (unlike several others I could mention) fall into the trap of becoming just an excuse for playing a string of hits like some tribute performance. The acting was sharp with some lovely supporting performances adding to the quality feel of the play.

A powerful moment was when Buddy sang ‘True Love Ways’ to his young bride Maria Elena (Vivienne Smith) reassuring her that his trip to the fateful concert at Surf Club, Clear Lake Water, Iowa was nothing to worry about.

The finale of the show recreated the Surf Club concert and the Empire audience were invited to play the role of the audience on that very night. This technique took the drama to a different level. We knew what was coming. Despite the on-stage good humoured antics in the snowbound, mid-west club, we were only moments away from the end of Buddy’s life in a plane crash and we were witnessing his final concert.

This was dramatic irony at its best. The music stopped abruptly; the curtain fell suddenly and the theatre was plunged into darkness. A single spotlight picked out Buddy’s guitar resting on its stand and a radio presenter’s voice, choked with emotion, announced to the shocked audience that Buddy, along with Valens and the Big Bopper, had died in an air-crash. One could feel the wave of shock spread across the auditorium as the truth of that momentous event sank in.

So as not to end on a low, the artists re-took the stage of the Empire and tore their way through many more numbers. Everyone was on their feet. Buddy died all those years ago, but despite the loss of a talent which bloomed for such a short time, this response showed that his music lives on.

‘The Buddy Holly Story’ is like Holly’s music; sensitive, dramatic and bitter-sweet. If you go to see it then come prepared to laugh and be delighted but take a hanky just in case, as this is one powerful drama.