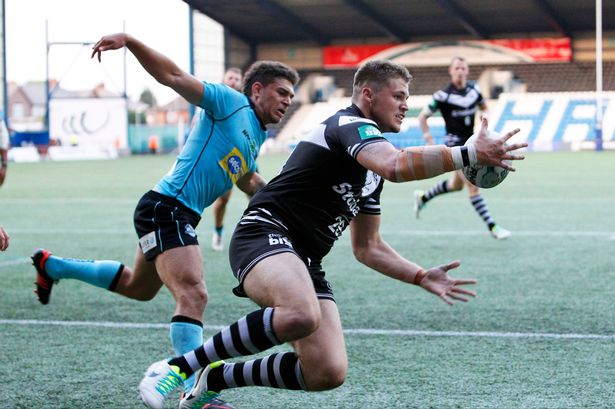 extended contracts until the end of the 2015 season.

pathway system and completed the journey from promising hopefuls to fully

Wigan-born Grant Gore, was voted Academy Player of the Year in 2010 having

joined the Widnes ranks as a 15 year-old. A successful 2010 also saw him

The following season, Grant went on to make his senior debut in the opening

Northern Rail Cup match of 2011 versus London Skolars, before scoring his

first senior try in his second game against the same opposition, in a

Challenge Cup-tie in the May of that year.

Sponsored by Alder Spring in 2013, Gore is blessed with the combination of a

half-back or hooking berth. His Super League debut came as a substitute

against Leeds Rhinos at Headingley in August 2012 and thus far, the 21

year-old has featured on a further two occasions this season.

at the age of fifteen, having previously represented local amateur clubs;

Given his size (6ft 7in) and presence, the former Bankfield High School

Club, commenting; “Both Grant and Adam have worked extremely hard and fully

deserve to be rewarded in this way.”