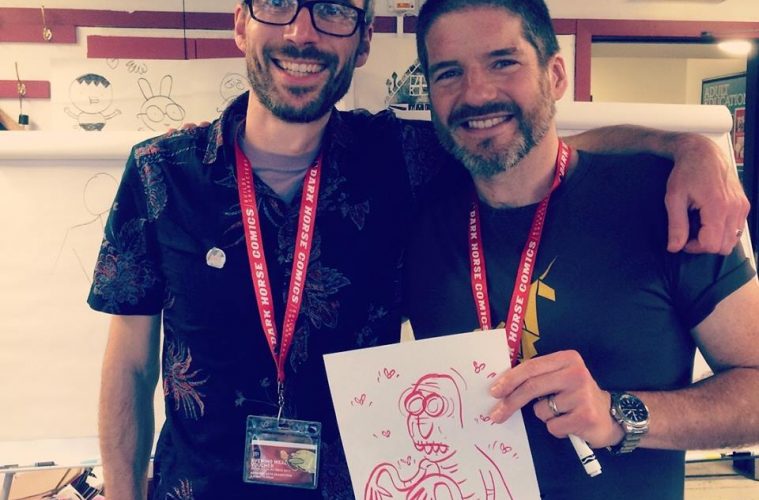 A Macclesfield graphic designer and cartoonist with a love of comic books has launched his own version, and gained the seal of approval from television presenter Jonathan Ross.

Marc Jackson, the grandson of legendary Manchester Evening News journalist Thomas Jackson, who died in the Munich Air Crash in 1958 decided to launch his own comic book after posting a few episodes on line and being overwhelmed by the positive response. And already the first two editions of “Man From Space” have sold out are being reprinted.

Marc who can be seen regularly selling his cartoons and caricatures at the town’s Treacle market said the storyline for the comic came to him suddenly and he just had to put pen to paper.

“I’ve always been interested in comics, it went hand in hand with the drawing from the age of six – and then Stars Wars came along and I was really hooked,”

The comic outlines the adventures of “The Man From Space” and his sidekick “Michael the Fish”, the twist is that the fish, who can only be understood by the central charector, has a serious gambling problem and most of the adventures are about the pair of them trying to evade or pay back the debts racked up by the fish.

The 40-year old is also making progress in his career as a cartoonist and indeed Macclesfield Today has just signed him up to produce a comic strip for each issue . “ I’m excited about that and I’m really looking to the response of the readers.”

Marc Jackson’s first cartoon strip can be seen on page 38 of the new issue of Macclesfield Today.Out Now