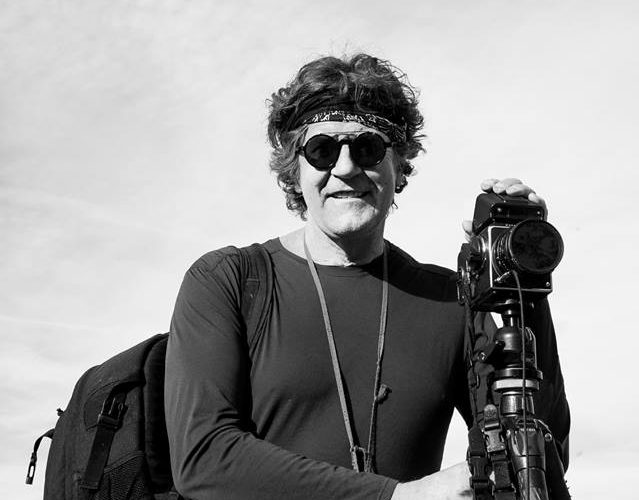 Review: Michael Kenna at The Brindley

One of the world’s greatest living landscape photographers, Michael Kenna, made a nostalgic journey back to his roots when he appeared at a special retrospective exhibition of his work, in the Brindley Theatre, Runcorn.

Kenna, whose work is influenced by master landscape photographer Ansel Adams and Bill Brandt, was born in Widnes in 1953 and says he owes much of his inspiration to his birthplace.

Kenna’s images on display are striking and esoteric; a world of perfection photography. They are true works of art in mood, theme and composition, communicating at the spiritual level as well as the visceral. The prints in this exhibition betray his fascination with the passage of time and the changes it brings about whether by the hour or the season.

“As a boy I spent a lot of time wondering around the town, in Victoria Park across the road, the local pond, the railway station, the Mersey bridge, factories, St Bede’s church, the rugby league ground and so on. It seems whatever I experienced as a child would later become photographic subject matter.”

The fascination with time goes back to his childhood when he would leave messages under stones and go back to them, often many months later. He would note the subtle changes in the paper, ink and even on the stone and the surrounding ground. This level of discriminatory observation and eye for detail is at the centre of the artist’s philosophy and is part of the process of re-visiting the same place many times, re-photographing and re-presenting the image.

Like all good works of art, there is a timeless quality about Kenna’s finished product. He uses long exposures, sometimes up to ten hours, to achieve his desired effects. The result is images altogether more ethereal in quality. In one photograph, the movement of the sea has become magically transformed into a billowing curtain; in another wind-blown clouds and the stirring of crops take on a dream-like quality.

Kenna studied art at college and his knack for finding a unique view married to his artist’s eye is central to his worldwide success. Often, a great photograph lies is in the less obvious and it is up to the photographer to find the unique view. Many of his landscapes are of reverse viewpoints. When everyone else is pointing their cameras at the Golden Mile or the Blackpool Tower, Kenna is to be found on the pier, shooting the narrow passageways restricted to the public.

Much of the work shows a fascination with such out-of-the-way places; lanes and tracks which lead potentially nowhere are some of his favourite subjects but above all he is a master of turning the ordinary into the extraordinary. At the start of his career, he was advised to always look behind when taking a picture because that is where the interesting shot really lies. He has taken this advice to heart as many of his most memorable images are of scenes most people would not usually think of photographing.

“I am interested in the relationship, juxtaposition, and interaction between the landscape and the structures that we, humans leave on the landscape. Stories, footprints, evidence, traces, atmosphere, and history… That’s what I always return to.”

Kenna is a great traveller, once saying that while photography was his hobby, travelling was his job. The immaculately printed photographs on show were shot all over the world including Dubai, New York, Hong Kong, China, and Japan. Nearer home, one of the prints shows a jetty on a small lake near Morecambe, the expanse of water heightened by the low camera angle.

Kenna uses the same technique in several of his other images, whether it be lying on the sand in Egypt to capture the distant pyramids whilst making the grains of sand under his hand appear like boulders, or freezing in the snow, belly down, to exaggerate the perspective, thus further isolating a ridge of trees. Kenna wants you to dwell in his pictures where there is quietness and stillness. Be it morning, noon or night, the sensation of isolation is palpable especially when increased by little reference in the picture to the true scale of things.

“Photography, for me, is not the end product, it’s the experience, and it’s being there, doing it.”

Most of the pictures in the exhibition are smallish, stark and minimalist but each one is an audacious image hard won from the landscape. If I were to find anything to criticise in his work, it would be that when viewing such a large body of his work one detects that there is a tendency for the photographer’s painterly eye sometimes not to allow the landscape to speak for itself.

Like any great artist however, Kenna has stamped his mark on his craft and has gone to extraordinary lengths to create sublime prints. He recounts that many of his images were taken while he was jet-lagged and fighting to keep awake to capture the exact moment for the perfect picture opportunity. In his time he has found himself on the Hermitage Museum roof, Moscow, in the dead of night, having bribed a Russian guard in the days before Glasnost and he has also spent innumerable winter nights in the open air, tracking the moonrise arching across the skies. But it has all been worth it in the end, cementing his place as a star in the firmament of the world’s great photographers.

“I would never classify myself as a night photographer. I just happen to photograph at night.”

It is obvious from many of the prints on display that Kenna has mastered all aspects of night photography both technical and aesthetic. Some observers have even gone on to say that he has done more than any other living photographer to advance night photography.

Kenna might not care for such accolades, as he comes across as a gently-spoken, modest man who, despite having shown in over 600 exhibitions throughout the world and his photographic prints being included in most major museum collections, including the National Gallery of Art in Washington DC, the Bibliotheque Nationale in Paris, the Museum of Decorative Arts in Prague, the Shanghai Art Museum and the Victoria and Albert Museum in London, appears to care more about the art for art’s sake than any financial reward or establishment reputation.

Kenna is a man who puts his Art at the centre of his existence. During the eighties and nineties, he photographed the many Nazi concentration camps over a 12 year period before time had chance to dull their raw edges and painful memories. During this endeavour, he went back time and time again to document the evidence as only a gifted photographer can do. When the task was complete he had over 6,000 evocative photographs.

At the end, he felt it wrong to profit from any of the work and despite the personal costs incurred, donated the collection to the French Government. For this achievement he was made Chevalier of the Order of Arts and Letters Ministry of Culture, France, 2000.

Kenna is about to celebrate his 60th birthday and remains a traditionalist unwilling to ‘modernise’ and use digital cameras, his images nevertheless remain as milestones in photographic history. When he began his Odyssey in Widnes all those years ago, photographing the Runcorn-Widnes Bridge and the Ethelfleda Viaduct Bridge, he could not have imagined where his journey would lead him and the incredible places he would photograph before returning home. Call in and look at this amazing display and judge for yourself why many believe Kenna to be the greatest photographer in the world.

The exhibition can be seen free of charge at the Brindley from 12 October to 23 November 2013.