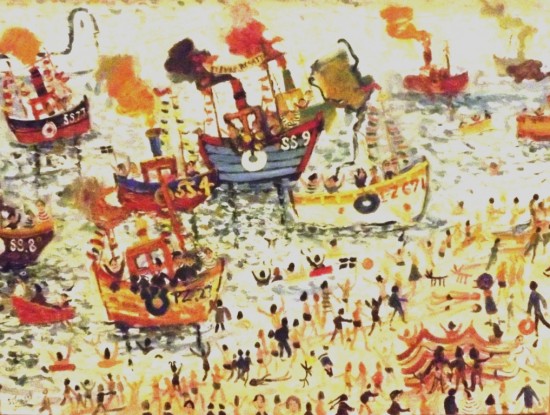 Simeon Stafford was born in Dukinfield in 1951 but relocated to Cornwall in 1996. At the of age of 14 Stafford met L.S Lowry who encouraged him to paint. Lowry became a family friend and remains a constant source of inspiration to Stafford.

In 1972 and 1973, he studied at Hyde College and in 1974, became a professional artist and exhibited his work in mixed exhibitions throughout the north of England and London. His work at this time reflected the gritty northern landscape and characters in what has been called a primitive style.

Simeon Stafford is an observer of life, his paintings are crammed full of incidents and human interaction. If his paintings are studied you will discover figures re-occurring, skipping Ruby with pig-tails, Eric and his tractor, Dot, the little girl cart-wheeling across the canvas (his aunt as a child) sometimes a man with red stripy trousers marching through a crowd, leading a small boy by the hand, (the artist with his son).

Simeon has had exhibitions throughout the country as well as Cornwall, in London he is represented by Oliver Contemporary. He has had paintings in the Royal Academy Summer Show and his work is in numerous private collections including Her Majesty The Queen and Tony Blair.

He was recently the subject of a major book by Jonathan Riley.