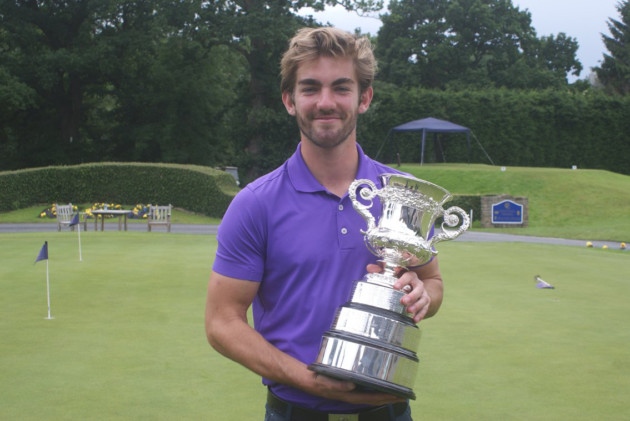 James Newton won the Cheshire Championship in dramatic fashion after a three hole play off against 2012 winner, James McCormick. Playing the 18th, Newton (Prestbury) had a three shot lead over McCormick (Styal GC) who finished with a 73 for a four round total of 284. It looked good for Newton until a lost ball resulted in a triple bogey 7 to finish with a 77, tied with McCormick.
The play off, the first since 1999, was played over the 10th, 11th & 18th holes. At the 396 yards 10th, Newton drove to within 15 yards of the green to birdie against McCormick’s par. Both players missed the par 3 11th with Newton having a extremely difficult chip from thick rough.

His chip finished inches from the hole for an easy par and with McCormick dropping a shot, Newton was 2 shots clear with one to play. Both players made pars at the 18th thus ensuring Newton won the 87th Cheshire Championship.

The Championship was played in brilliant sunshine and record temperatures over a tough and well presented Eaton GC. With deep rough, hard fairways and challenging greens the course proved a true championship test which brought out the best from the players who were full of praise for the course.

Other prize winners were: