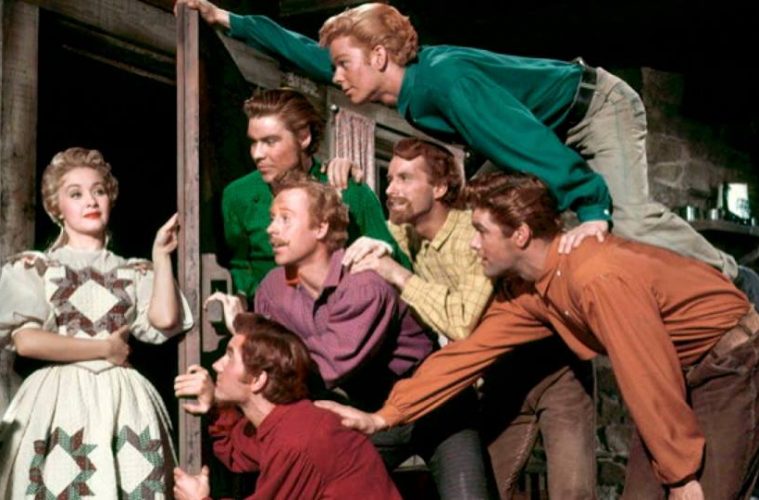 Curiously dated yet still packing a big punch, this most recent whirling dervish production of Seven Brides for Seven Brothers, he-hawed, somersaulted and do-si-doed its way across the wide stage of the Liverpool Empire. Regarded as an all-American, romantic comedy, it had enough energy to power-up the city but I was still left in the dark as to why this anachronistic musical had been resurrected for yet another major tour and why the romance was in such short supply.

The production values were high; costume, choreography, lighting, orchestration, and stage-set design were all fine and the singing, especially of Adam Pontipee (Sam Attwater), Milly (Helena Blackman) and Gideon (Sam Greaves) was excellent but part of the disconnection I felt, lay in the play’s one-dimensional plot and the its misogynistic values which are out-of-step with modern audience expectations. People’s tastes and values have come a long way since the troubled MGM film was originally released in 1954.

The play is funny if you like slapstick but comedy aside, the unconventional and uncomfortable relationship between Milly and Adam has a darker underbelly which is difficult to laugh away. It is also hard to like or have any empathy with the other Pontipee brothers and their action of stealing the town’s young womenfolk which requires just too much suspension of disbelief.

Unkempt, unwashed and with a tendency to fight at the drop of a hat, this ill-mannered bunch of young men are drawn more like fairytale characters than fully rounded people with whom one can share any feelings. Their brides-to-be come across equally as shallow and insincere and some of the sequences between the two groups are more ‘Carry-On’ than carry me off.

In the scene where Milly introduces her new born baby to father Adam, the play does have an exceptional moment where the mood transform into calm and tenderness but it is still undermined by what has proceeded it. Adam, fearing he was losing his alpha male position in the Pontipee household has incredibly sulked away the winter, preferring his own company in the life-treatening snowy hills to that of his brothers and his loving new bride. This scene showed what might have been if such changes of mood and pace had been employed at other key moments.

The play does have obvious strengths, including its fabulous, robust, energetic dance numbers and its rousing and plaintiff songs which include: Bless Your Beautiful Hide, Goin Courtin , Spring, Spring, Spring, and Wonderful Wonderful D.

In being faithful to the spirit of the original film, I believe an opportunity has been missed, to turn this production from a good effort into a great theatrical experience. Despite the brave performances of its talented and youthful cast, I left the theatre wondering what might have been if the script had been interpreted differently and dragged (hollerin’ and howlin’ no doubt) into the twenty-first century.

If you rated the original film however and like a lot of bang for your buck, you will love this big, brash offering but if like me, you prefer your plots with a little more depth and subtlety, you will leave the theatre knowing you have had a good time but a little disappointed anyway.