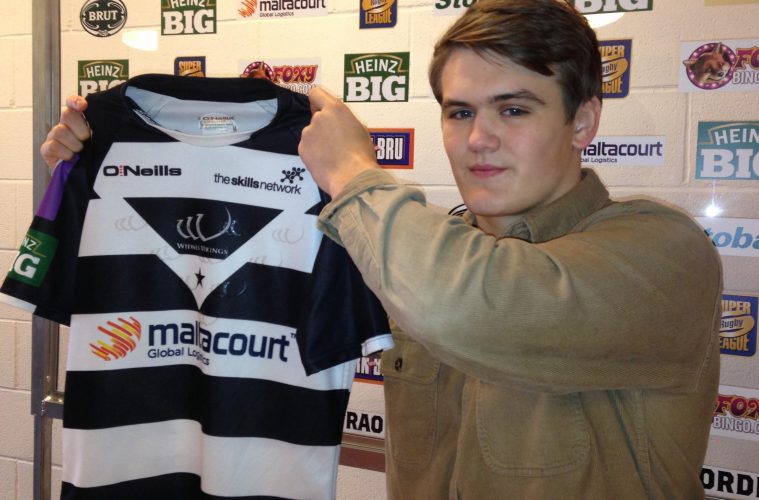 Widnes Vikings have announced that U19s Captain Kieran Butterworth, has signed a one year full-time professional contract and will become a fully fledged member of Denis Betts’ first team squad in 2014.

A former West Bank Bears and Halton Farnworth Hornets junior and Ex-pupil at nearby Saints Peter and Paul Catholic College, 19 year-old Kieran has progressed through the Vikings ranks, representing every age group since first joining the Club’s Scholarship programme, back in 2008.

Kieran has trained regularly with the Vikings first team for the past three months, and has caught the eye of the Vikings’ Head Coach Denis Betts, who commented:

“This offers us a chance to develop Kieran even further through our system. He has a great work ethic and now we just need to see if we can aid his undoubted potential by integrating him into the first team for a longer period, and giving him a full-time position.

“It’s nice to be able to offer lads who really want to be a part of this team an opportunity. That’s what it is with Kieran, we have offered him the chance to develop his skill-base and create a career for himself.”

Vikings’ Head of Youth Performance Phil Finney was the man who rewarded Kieran with his first professional contract at the Club in 2010, when he was just sixteen. Having watched his progression closely ever since, Phil was keen to add further praise, stating:

“Kieran is thoroughly deserving of this contract. This recognition has been awarded as a result of his dedication, perseverance and efforts to fulfil his potential within rugby league.”